Political parties from the mainstream center-right and center-left have traditionally dominated the European Parliament. However, times are changing, with an increase in far-right and Eurosceptic MEPs elected and the recent formation of far-right groups in the European Parliament, including the Europe of Nations and Freedom (ENF) led by Marine Le Pen and Geert Wilders. This Europeanisation of the far-right is most alarming for Brussels, as their vision of Europe is radically different to the existing one.

Formation of the ENF

On June 15th 2015, one of the three far-right groups in the European Parliament, the Europe of Nations and Freedom (ENF), was formed. Marine Le Pen announced that it would be composed of her party, the National Rally (RN), as well as the Dutch Party for Freedom (PVV) led by Geert Wilders, Italy’s Northern League (LN) led by Matteo Salvini, the Belgian Flemish Interest (VB), the Freedom Party of Austria (FPÖ), ex-UK Independence Party MEP Janice Atkinson, and the Polish Congress of the New Right (KNP). Marine Le Pen finally united parties from seven different member states, the minimum requirement in order to form a group, as well as at least 25 MEPs1. However, this had taken time, as Le Pen and Wilders had initially encountered a number of difficulties.

Prior to the European Parliament elections in 2014, Le Pen and her Dutch ally Wilders had formed an alliance with the aim of forming a group2. However, although they had 38 MEPs, they were only able to secure them from five member states by the time the deadline passed3. This denied them not only funding, but also speaking time and committee positions4. At the same time, far-right Eurosceptic parties were overall successful in the May 2014 European Parliament elections. For example, in France Le Pen’s party obtained 24.86% of votes, winning 23 seats in Parliament and scoring higher than any other party in the country5.

Le Pen’s explanation for her inability to form a group was her refusal to partner up with parties that held values that were “incompatible” with her own6. This seems to have been linked to her willingness to adopt a softer image to that of her father and former party leader, Jean-Marie Le Pen7. This process of “de-demonization” (dédiabolisation) was an attempt at achieving greater credibility whilst retaining a populist far-right identity8. From this also clearly followed her decision to change the name of her party from National Front to National Rally in June 20189. Thus, she and Wilders decided not to allow parties with more extreme views than their own to join their group, fearing this may have an impact on their performance10. This included the rejection of Greece’s Golden Dawn party, considered violent, and the Hungarian Jobbik party, which had previously made anti-Semitic statements11. It can also be argued that the presence of another far-right group, that of Nigel Farage’s Europe of Freedom and Direct Democracy (EFDD) (previously Europe of Freedom and Democracy) formed in 2009, may have made the formation of a second far-right group more difficult in 2014.

Thus, the ENF was finally formed in 2015 following one year of negotiations with members of previously independent parties12. Since its creation, the group has also welcomed the German Blue Party (BP). It is currently co-presided by Nicolas Bay of the National Rally, and Marcel de Graaf from the Party for Freedom13.

This was not the first time the French far-right party had attempted to form a far-right group in the European Parliament. Marine Le Pen’s father, Jean-Marie Le Pen, had joined far-right parties from Italy, Greece and later the UK to form the Group of the European Right in 1984. The group collapsed in 1989 and was replaced by the Technical Group of the European Right which was composed of MEPs from the French National Front, the Belgian Vlaams Blok and the German Republikaner. However, during the 1994 European parliamentary election, it failed to obtain a sufficient number of MEPs to qualify as a group and consequently dissolved14. Only in January 2007 was there another attempt made, leading to the creation of the Identity, Tradition and Sovereignty group15. It included Le Pen’s party as well as far-right parties from Bulgaria, Romania, Italy, Belgium and Austria. However, it failed to survive following the decision of Romanian MEPs to leave in November of the same year16.

Meanwhile, there has been some change in the ENF’s MEP composition since its formation in 2015. Most of those who have left the group were former members of the National Rally, which is significant because the French political party makes up the largest portion of the group. Those who left decided to defect, joining other political parties such as Debout la France or Les Patriotes, and have consequently joined other far-right groups in the European Parliament such as the European Conservatives and Reformists (ECR) or EFDD. Others who have left the group include a member of the Dutch Party for Freedom and a Romanian MEP17. Meanwhile, some MEPs have joined the group since it was formed in 2015. For example, three MEPs from UKIP have joined the ENF in January 2019, including UKIP leader Gerard Batten18. This demonstrates how the group has had difficulty stabilizing over the years due to a high turnover of MEPs.

Motivations and core beliefs of the ENF

The Europeanisation of the far-right seems surprising, considering that the parties within the ENF are Eurosceptic and thus do not adhere to the fundamental values of the European Union. However, their strategy today consists not of rejecting or leaving the EU, but of fundamentally changing it from within. They claim to represent a Europe of sovereign nations, protecting the people from a distant and undemocratic EU that seeks to impose its own rules on member states. Marine Le Pen has described the EU as nefarious and “an anti-democratic monster”, vowing to destroy it in order to regain popular and national sovereignty19. These far-right parties believe that the technocratic elites in Brussels are a threat to Europe, because they have opened Europe’s borders and welcomed liberal globalization20. Consequently, they believe that they represent the alternative to the current situation.

There are also advantages to forming groups within the European Parliament, which has likely encouraged these far-right parties to work together. An important advantage involves access to higher EU funding for staff and parliamentary activities than the non-attached MEPs.21 According to Politico, Le Pen’s group should be allocated €3 million per year from EU funds22. The amount of funding is calculated according to the number of MEPs in the group. Until now, the far-right seems to have used their seats to fund domestic political activities or as a “platform for anti-EU rhetoric”23. It also increases the degree of political influence in the EP, providing a larger amount of speaking time in debates during plenary sessions, as the number and length of contributions are determined by group size24. Moreover, alongside its symbolic value, being part of a group increases the chance of getting MEPs elected to key positions in the Parliament’s political and organizational structures, such as committee and delegation chairs25. Thus, it would provide the group greater influence in Parliament.

The ENF has several core beliefs. One of the main issues repeatedly referred to is that of immigration, portrayed by many far-right parties as a threat to European states and their identity. This has especially been the case since the start of the migration crisis in 2015. Marine Le Pen and her party have emphasized the idea that immigrants are a threat to France’s culture, integrity and values, and that France is unable to integrate any more people26. Meanwhile, Geert Wilders has explicitly referred to his aim of fighting “the “Islamisation” of Europe”, adopting a more extreme nativist approach27.

This anti-immigration stance was clearly shown following the adoption of the Global Compact for Safe, Orderly and Regular Migration on 10 December 2018 by the United Nations General Assembly in Marrakech28. Marine Le Pen claimed that the Marrakech pact would allow millions of migrants into France and other European countries and was signed without the approval of the people29. More recently, Le Pen has falsely claimed that migrants who have just entered France earn more than the average retired French person30. Meanwhile, Matteo Salvini has been extremely vocal about his unwillingness to welcome migrants into Italy. He reiterated his stance when he refused a request by NGOs that Italy open its ports to vessels transporting migrants in December 201831.

2019 European elections and beyond

According to the European Parliament’s seat projections for the next elections, released on March 1st, the ENF is predicted to win 59 seats and the EFDD 39 seats, whilst the European People’s Party is set to gain 181 seats and the Progressive Alliance of Socialists and Democrats 13533. According to the Jacques Delors Institute, the far-right is likely to hold between 20 and 25% of seats in Parliament34. This clearly shows that they will not obtain a majority on May 26th.

However, a larger populist presence is a real concern for those in Brussels. Although not calling to leave the EU, the reforms they envisage would “amount to the wholesale destruction of the EU as currently conceived”35. Individually, the far-right groups do not have sufficient power to enact these reforms. However, if the three far-right groups (ENF, ECR, and EFDD) were to join together, they could block key legislation and measures and possibly impose their own agenda. For example, on most legislation, the European Parliament needs an absolute majority to amend or reject the position of the Council of Ministers36. It could also make the selection of candidates for influential EU positions – including president of the European Commission, European Council, and the European Central Bank – difficult37. 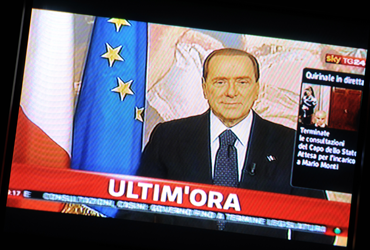 The Monti Government and the Europeanisation of Italian Politics

The fall of the Berlusconi government in 2011 was a game-changer in Italian politics. The prominent role taken by the EU in the succession of the events was unprecedented and contributed to catalyse the attention of the public on the European level. The magnitude of the change was clearly visible...
Bibliographie