Is participation in EU elections decreasing?

In popular discourse, no one seems to question or temper the idea that participation in European Union (EU) elections has been decreasing constantly. After all, hasn’t it? With the elections coming up, it’s a good time to get the facts straight. 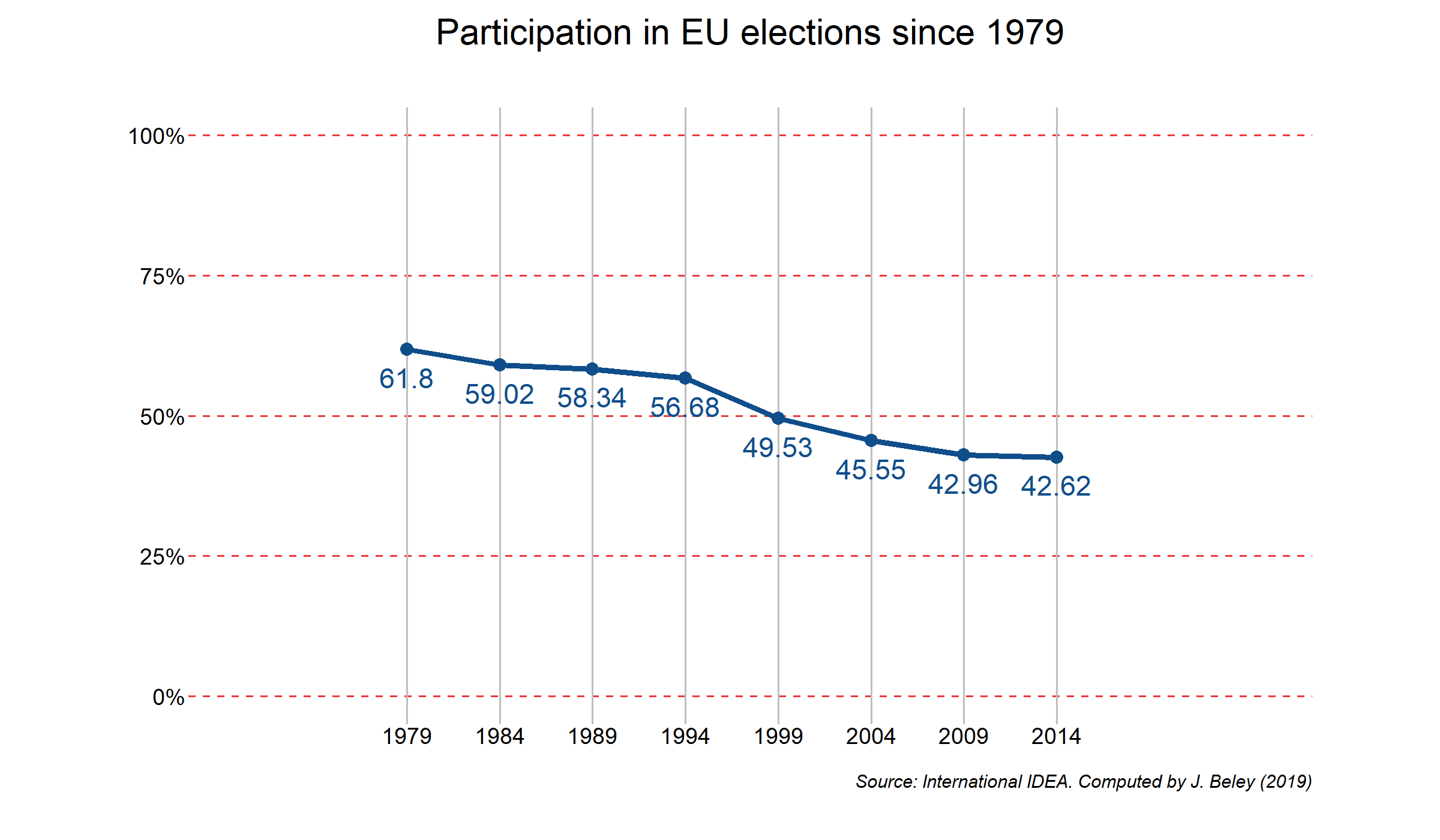 Early estimations of the voter turnout in the 2014 elections claimed that participation had increased for the first time in EU history, reaching 43.09% of registered voters (compare with 42.96% in 2009). This was initially hailed by commentators and senior EU representatives as a good sign for democracy in the Union. At the time, MEP (Member of Parliament) Guy Verhofstadt called the small increase in turnout “an endorsement of the European project”. Alas the figures – which stemmed from exit polls – were soon to be revised downward by half a percentage point to 42.62%. There would be no inflexion of the downward trend in turnout which has characterized European elections since 1979.

Looking at global figures for the European Union, it is undeniable that participation in EU elections has been steadily decreasing since direct universal suffrage was put into place. This trend has repeatedly been instrumentalized by Eurosceptics: how can the most democratic of EU institutions – the Parliament – be legitimate if it only represents the wishes of roughly 40% of registered voters? In fact, does this show that interest in the European project is faltering, or does it hide a more complex situation?

Caution is warranted when looking at average figures for turnout: what exactly is being compared from one election to the next? How can turnout in 1979, when the European Communities were composed of nine West-European countries, be compared with turnout in 2014, when the Union counted twenty-eight member states with different political cultures and democratic traditions? Luxembourg and Belgium, for instance, have mandatory voting, while some post-communist states like Slovakia and the Czech Republic score notoriously low on turnout in European and domestic elections alike. 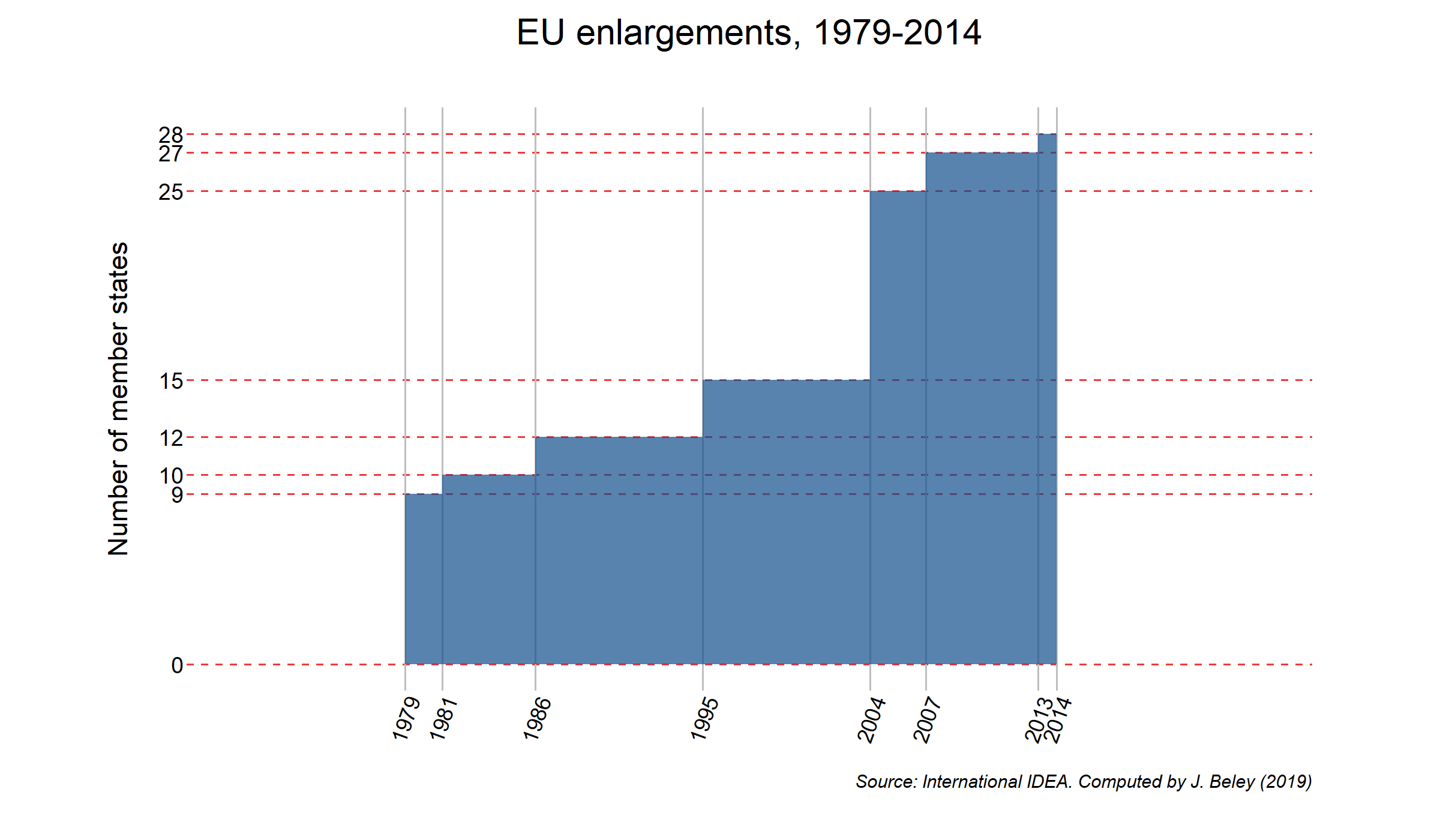 Looking at the data, turnout is highly negatively correlated with the size of the EU, as shown in the following graph. Indeed, plotting turnout against the number of member states shows that highest turnouts have occurred when the Union was smaller, and lowest turnouts have occurred when the Union was largest. This fails to take several things into account, including regional contrasts in voting, as well as a potential real disinterest in the Europe Union. It could be the case, for example, that voters are less interested in the European Union precisely because it is larger and less tangible. Nonetheless, the negative correlation is blatant. 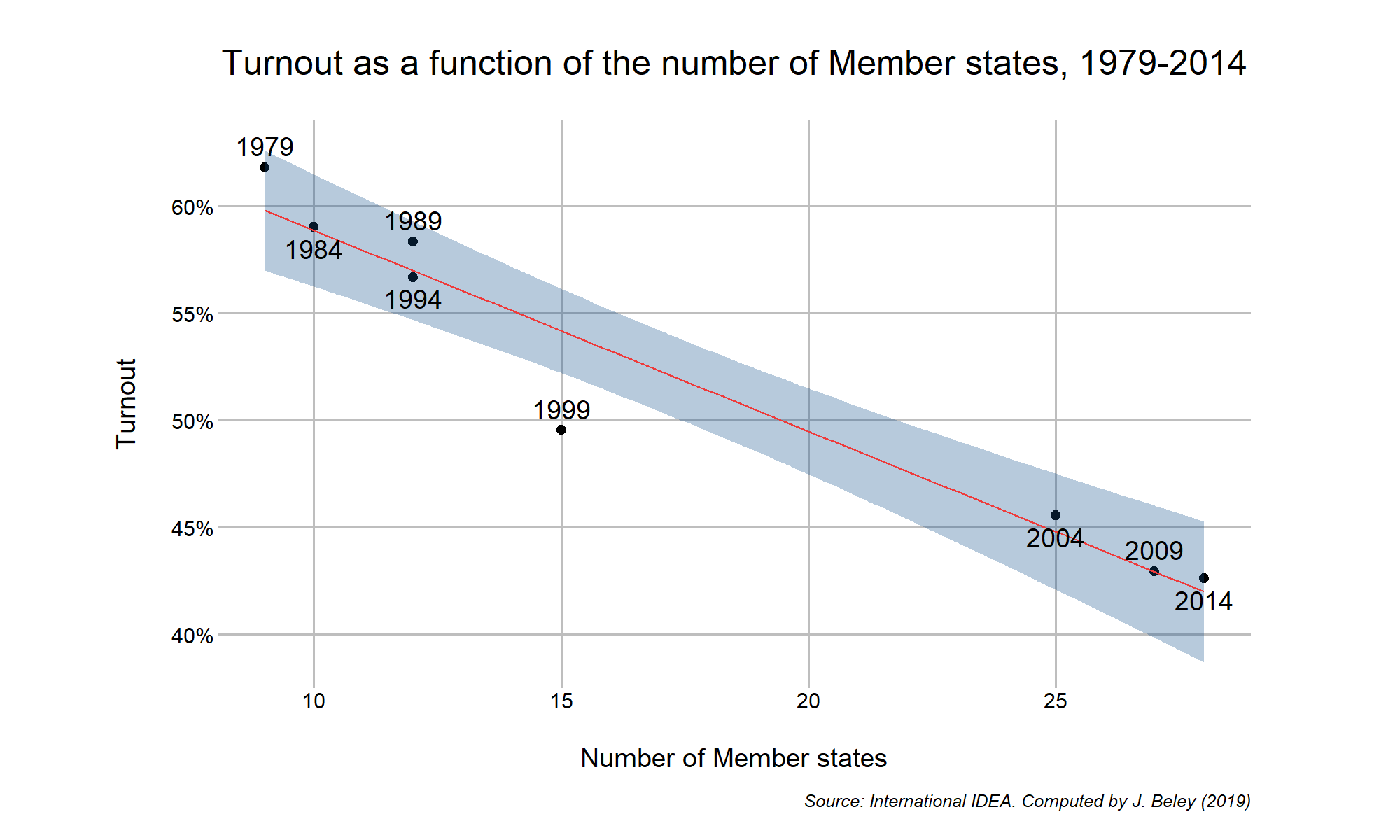 In addition to this relationship with enlargement, regional contrasts in voting patterns are clear. Central and Eastern Europe (the Czech Republic, Slovakia, Slovenia, Croatia, Poland, Romania, Bulgaria and Hungary) generally show lower voter turnout than the rest of European Union. It is not clear, however, whether this shows a specific lack of political engagement with the EU or whether interaction with the EU is simply modelled on local political practices in these post-communist states. At any rate, this East-West turnout differential is likely to affect the average turnout significantly since the 2004 enlargement. In the map below, where turnout is represented by the colour scale, it is easy to see the divide: Central and Eastern-European countries are much lighter than their Southern, Northern and Western neighbours. 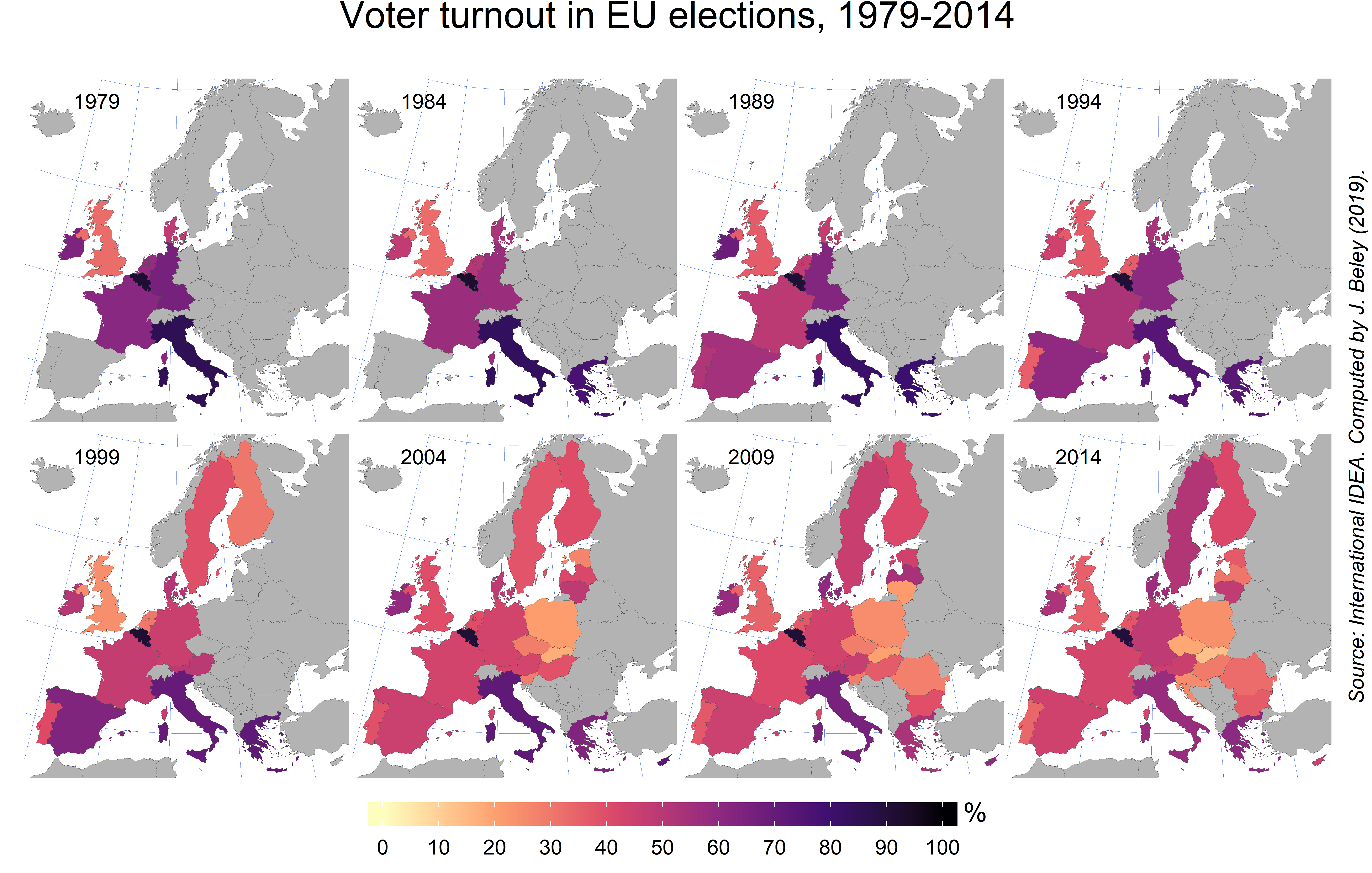 In order to control for the enlargement of the EU as well as the regional differences in turnout, it can be interesting to look at voting patterns of a more restricted set of EU countries. The nine members of the European Communities in 1979 (Belgium, Denmark, France, Germany, Ireland, Italy, Luxemburg, the Netherlands, and the UK) are a good place to start. These countries were the first to elect the European Parliament at universal suffrage forty years ago. 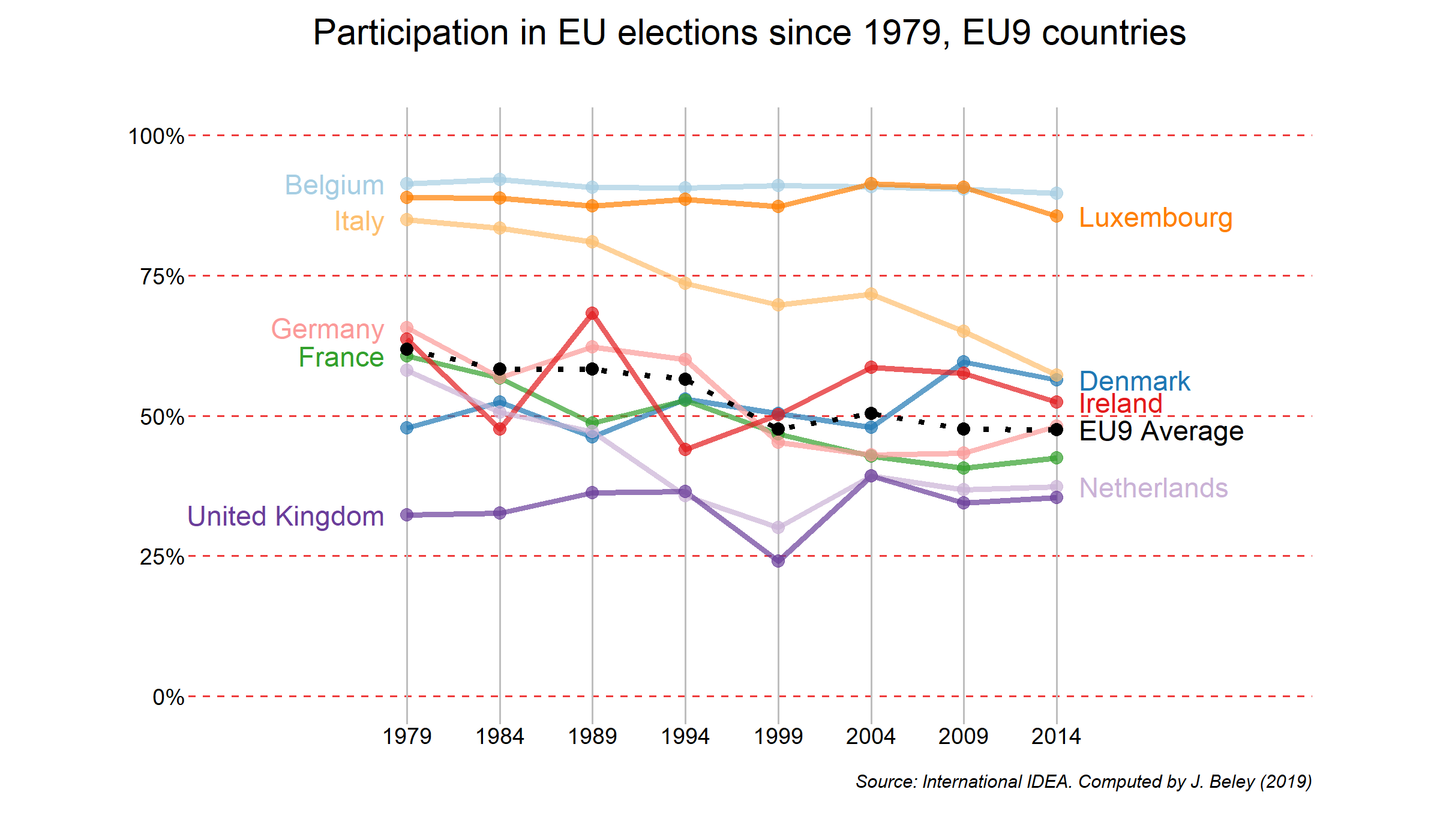 The line chart, with values for each country and the (weighted) average, shows that no country (to the near exception of Italy) exhibits a purely decreasing trend in voter participation. More interestingly, the most striking drop in turnout happened between 1994 and 1999, followed by a stagnation in 1999-2014. Looking back at the first plot, the sharpest drop in participation for all EU member states also occurred during the 1999 elections. However, the stagnation which followed among EU9 countries seems to suggest that decreasing turnout after 1999 is largely due to enlargement towards the East (most notably in 2004).

The dataset used for this article (provided by International IDEA) also contains data about turnout in national legislative elections in EU countries over 1979-2014. This data provides a valuable tool for comparison: how has participation in EU elections evolved as against participation in comparable domestic elections? Using weighted regression (turnouts from larger countries have a larger influence on the model) for both types of elections in EU9 countries produces the following plot. Red points represent domestic elections in member states while blue points represent EU elections. The size of the points is proportional to the real number of voters. The first striking element is that both regression lines are starkly decreasing, with a loss of 13 turnout percentage points for national elections and 18 percentage points for EU9 elections. 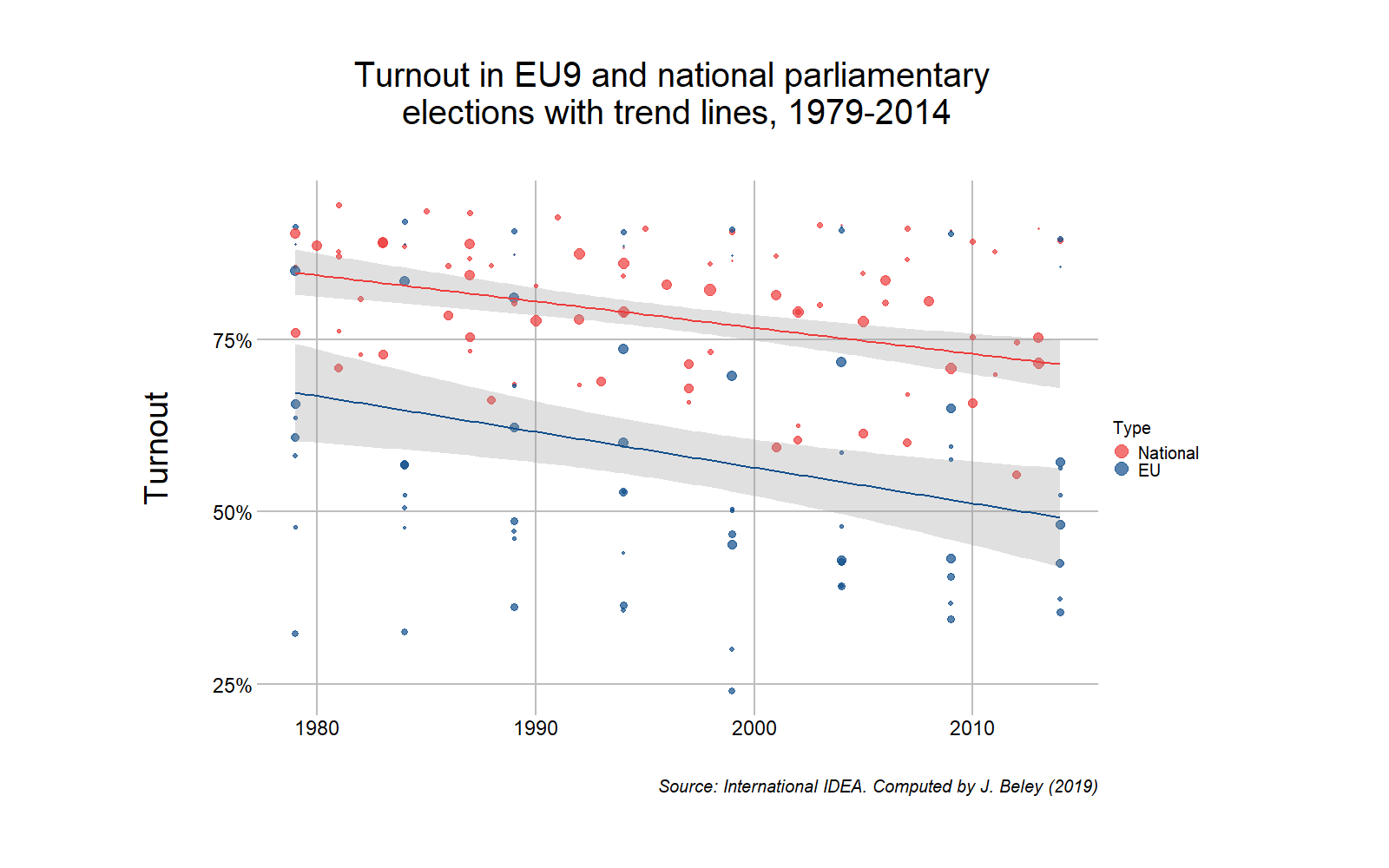 This means that at least part of the decrease in turnout in EU elections is not specific to the EU. Nonetheless the decrease in turnout is stronger for the EU9 model than for domestic elections: the EU regression line is slightly steeper (-0.51 versus -0.38). Additionally, the estimated turnout in 1979 is higher in national elections than in EU9 elections, which means that as a proportion of the initial turnout, the decrease is also mechanically larger for the EU: on average, the EU elections lost one fourth of their initial turnout, whereas national elections in the same countries lost approximately one sixth of their turnout.

In this way, despite part of the decrease in turnout being EU-specific, the trend should be moderated with respect to several factors, including size of the EU, regional discrepancies, and voting patterns in similar domestic elections. The elections in May this year will tell us how the trends discussed above evolve.

N.B. The dataset used for this piece and the R code that produced the figures is available Dataset. 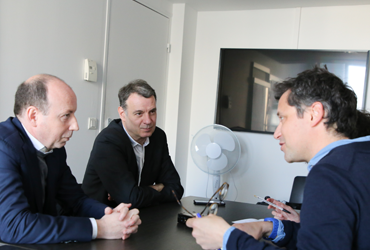 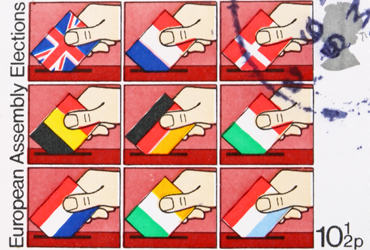 The Long Path of Direct Elections to the European Parliament: Then and Now

The long years of war had left Europe weak and resource-stripped; there was a pressing need to build a unified European alliance. To regain its strength and ascertain peaceful conditions, on May 9, 1950, Robert Schuman, the then French Foreign Minister, proposed the formation of the European Community of Steel...